What Is This Symbol I Have You Wonder? Click To Learn More ~ Billy Caputo 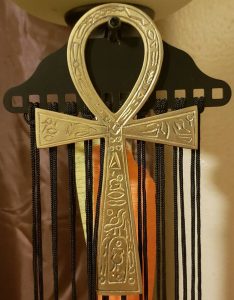 What is it exactly?

Well, since many have written me asking what is the symbol i post on my social media news feeds such as Fb, Instagram, google+, twitter and others and also that I use on my t-shirts, mouse pads, jewelry and advertisement i thought it would easier to explain in a blog post here on my website. It’s called an ANKH.  The Ankh is an Egyptian symbol dating back to ancient times, symbolizing Life. The symbol is a teardrop-shaped hoop with a cross connected directly below it. The hoop of the ankh represents the sun, with the horizontal bar of the cross representing the horizon and the vertical bar of the cross representing the path of the sun, which rises above the horizon. The ankh was regularly used in ancient Egypt throughout hieroglyphics, art, and artifacts to show the importance of life. The ankh is sometimes referred to as the ”key of life.”

Although the symbol was always used to depict Life, it was used in many ways. More specifically, the ankh could symbolize physical life on Earth, eternal life in heaven or the underworld, immortality, and even reincarnation. Often, the ancient Egyptians would carry ankh ornaments for protection or use them in their cult worship for their magical properties.

Another use was to paint an ankh on a tomb or death mask, to symbolize passage into the afterlife. It was customary to place on the pharaoh’s tomb images of the ankh, in addition to images of specific gods that the pharaoh may have worshiped in life. The ankh was to help the pharaoh’s spirit pass safely from the earthly realm into heaven, into the protection of the specified gods. One use of the ankh was to symbolize a long life for the king, which is often shown in paintings of pharaohs. This is a fairly common use for the ankh, and there are many painted scenes where the people of ancient Egypt give ankh figurines to the pharaoh to wish him a long and prosperous life on the throne. It is also shown in hieroglyphic form in many royal inscriptions for the same purpose. When a god or goddess was shown holding an ankh towards a pharaoh, it was to display the blessing of eternal life.

The ankh was such a powerful symbol that it was also often used to name things, and sometimes was incorporated into existing names. When it was associated with the afterlife, the deceased person could be referred to as an ankhu. Pharaohs would occasionally incorporate the word into their own names or the names of ancestors or gods to emphasize their life or afterlife properties. So there you have it. Check out my other Informative Blogs while you are here on my site. Until next time.. Happiness and Health! Billy