Can The Dead Hear Us Speak To Them? ± Billy Caputo 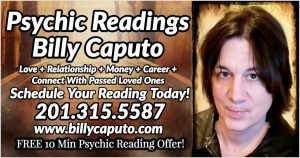 It depends mainly on whether or not they’re in your vicinity when you attempt to communicate.

If they aren’t, it’s not all a loss – a guardian angel, familiar spirit, or spirit guide could pass the message along for you.

When you communicate with the dead or the dead communicates with you, there are also sensations, images or other thoughts you receive in addition to the plain communications you receive that provide you with the indication that this may be what’s happening, versus you just thinking about them, or reminiscing about fond memories.

Some biblical texts state that speaking to the dead is dangerous; however, others assert that because the deceased become angels when they cross over, communication with the deceased is akin to receiving messages from angels, or otherwise known as ‘messages from heaven.’

This is why you will often see Christian or Catholic mediums whom still practice their faith and pass messages.

Religion has nothing to do with who can and can’t hear and pass messages from the otherworld and this one. The dead can communicate to anyone who is open and who has the faculties, the time, space and mind to receive it.

If it’s a regular spirit, such as one that is closely linked to you, such as a spirit guide or an angel, then the answer yes, they can almost always hear you – they can also respond – because they’re always there.

Then depending on what tools are available to them, this will determine how, if and when they respond, if they do. Not all spirits are here to communicate with humans individually. The deceased occasionally move on and or are with others at the time you attempt communication, but that doesn’t mean they won’t hear you – other spirits often pass the vital stuff along and communicate with the others in a counsel-like setting.

Do you hear the dead or know someone who does? If so, consider hearing their voices may not be a mental illness. Many mediums do get checked out in their early days only to find their tests come back clear and it’s just clairaudience. Some deceased people also become spirit guides for the living and will hear you communicate with them and take those communicates to action, learn more about this here.