Being A Psychic ~ Billy Caputo 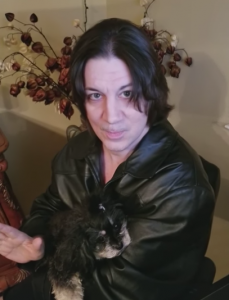 The term “psychic” meaning is to perceive something by means other than the normal five senses, which is why they call it the “sixth” sense. It is that extra sense, or extra sensory perception, that some claim we all have. It is associated with spiritualism because this particular sense is not physical in nature. It doesn’t involve a nose, eye, skin, ear or tongue. It is the intangible mind that in fact breaks through time, space and matter for its perceptual ability.

The dictionary labels it as “mysterious”. Ịt has remained a mystery because it was surrounded by fear for centuries. To be psychic meant you were a witch, and witches were persecuted. What we don’t understand, we fear. What we fear, we ostracize or kill. Luckily, we don’t live in those times anymore but that large veil of suspicion, fear, and disbelief still permeates our society. Unfortunately, because it is so intangible, it has also been used by tricksters, charlatans and frauds in order to bilk people out of their money, further adding to the layer of distrust on the subject.

Since being psychic pertains to the mind, we are all psychic. Of course, since we discourage and bury our psychic ability it’s gone dormant, but there are those that were born with deeper levels of sensitivity than others. Those are the ones that get noticed or develop a career in it. Though you may not believe it, you do have this ability. In later articles on this website, we’ll give you tips and exercises on how to increase your psychic ability.

To be psychic might mean that you get a hunch, a gut feeling, a flash in the form of a vision in your mind’s eye, auditory messages, or a “feeling” that you can’t quite explain. You may also dream an event that later comes true. People even say deja-vu is a form of psychic ability. How many times have you said, “I’ve seen this before! I know it!” yet have not been to that particular place or seen a particular event?

To explore what being psychic means involves exploring yourself. To open up to the possibility that you’re more than your five senses. Hopefully through these articles and webpage you can gain a greater, fearless understand of what it means to be psychic.